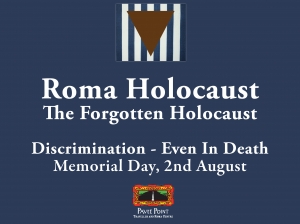 Roma and Traveller activists gathered today in solidarity to commemorate the Roma and Sinti who were killed during the Holocaust.  Roma held up the banner ‘Discrimination Even in Death-the Forgotten Holocaust’ and laid flowers in memory of those who suffered during the Nazi era.

“The Holocaust affected my community so deeply and I want to pay my respects today.  My grandmother was a survivor of the Holocaust and I have seen the pain that this experience caused.”  Monika Makulova, Roma development worker, Pavee Point.

“Our experience of the Holocaust is often overlooked, many people don’t even know that Roma were targeted in the Holocaust.  So many Roma died and we need to remember this.  But also we need to stop the racism against Roma, this has never stopped for us” continued Monika Makulova.

“The Porajmos commemoration is a stark reminder of the need to combat racism and intolerance, in particular that experienced by Roma, Sinti and Travellers today.  Unfortunately, Roma’s experience of racism is not a thing of the past.” said Ronnie Fay, Co-Director Pavee Point.

What:  To mark Roma Holocaust Remembrance Day (2 August) Pavee Point Travellers Centre will hold a memorial event on 1st August in commemoration of the Roma who suffered during the Nazi era.  This marks the anniversary of the extermination of 3,000 Roma and Sinti in the gas chambers of Auschwitz-Birkenau in 1944.

Roma community members (approx. 15) will gather to lay flowers and commemorate those who suffered in the Nazi era.  The event will be addressed by Minister O’Riordáin and Monika Makulova, Pavee Point Traveller and Roma Centre, whose grandmother is a survivor of the Holocaust.

Focus on Discrimination Against Roma in School Systems

According to Report Card 2021 the Government has acknowledged that Traveller and Roma children have been more severely impacted by school closures due to inequalities in access to broadband and technology. Tanya Ward,...