Over 30 people gathered at Pavee Point today to hear the experiences of 10 young Travellers and Roma who visited Auschwitz to commemorate the Roma Genocide in August this year.

The participants described the visit as ‘very hard’.  “When you’re walking there, where people took their last steps and try to feel what they feel – it’s very hard,” said Bianca Paun from Kildare.

Speaking to two Roma Holocaust Survivors was an inspiring experience for the participants. Raymond Gureme, Roma Holocaust survivor didn’t speak about his experience in Auschwitz for 70 years.  He is now 93 and met the group and told them how he escaped from the camp at the age of 15.

“When you think of what people have been through I don’t know how they talk,” added Bianca.

Jason Sherlock from Galway said he was most affected by an exhibit in the museum of a room full of shoes.  Others spoke of how moved they felt when they saw thousands of pairs of glasses which had belonged to Holocaust victims.

Background to the trip.

In 2001 the first permanent exhibition in Poland to provide full documentation of the destruction of the Roma was opened at the Museum in Block no. 13 at the Auschwitz I-Main Camp site. 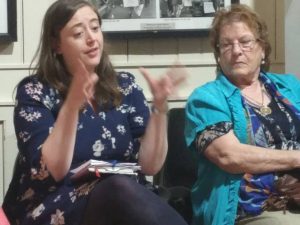 The Nazis “liquidated” the so-called “Gypsy Family Camp” in Birkenau on the 2nd of August 1944, murdering the three thousand Roma who were still alive there. From the winter of 1943 through the summer of 1944, nearly 23,000 Roma from over ten European countries were registered in the camp. Barely a thousand of them survived.

The participants attended a special Roma Genocide memorial on 2nd of August this year where people lit candles and presented roses.

The trip enabled the group to meet about 250 other Roma and nomadic peoples from around Europe and to exchange information. 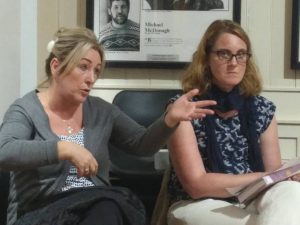 “A big focus of the trip was on what’s happening in Europe today,” explained Gabi Muntean, a group leader on the visit. “We learned about the anti-gypsyism around Europe, the hate crime and hate speech against Roma.”

Patrick Reilly a Traveller group leader on the visit explained how a woman Roma Holocaust survivor said she believed that Auschwitz was just sleeping.  “It’s our job today to pay attention and to stand up for human rights for all minorities.”

The participants will be working in their areas to raise more awareness of the Roma Genocide.  More details on this initiative here.

Thanks to everyone who contributed to our fundraising drive which raised €1,500 and was used to cover basic subsistence costs.

COVID Tracker is a free app for your mobile phone. It will help us to protect each other and slow the spread of Coronavirus (COVID-19) in Ireland. Find all info here. COVID Tracker...