Pavee Point engaged in a thematic 16 Days of Action Campaign, which aimed to raise awareness about violence affecting young girls and women and promote healthy relationships based on respect and equality. The campaign produced awareness raising EXPECT RESPECT! wristbands, and ran a social media campaign which culminated in the launch of the campaign on 27 November.

The event heard from Rebecca McDonagh, a Violence against Women Worker at Pavee Point, who used Twilight Saga movies as a discussion point to explore the images that young people are exposed to about relationships, respect, power and abuse within relationships. She also highlighted some worrying gaps in the levels of awareness about domestic and sexual violence among young Travellers, and the need to talk to young Travellers and settled people about healthy relationships and gender equality, so that young women and men can expect respect in their relationships.

The event also focused on looking at forms of violence that particularly affect young women and the use of mobile phones and technology as methods to stalk, control and inflict sexual violence on young women.

Pavee Point expresses their gratitude to Jennifer Molony, Detective Sergeant with Domestic Violence & Sexual Assault Investigation Unit, and Michael McKenna from Youth Action Northern Ireland for their participation and input on the day. The fantastic panel of speakers helped raise awareness about keeping safe and reporting online violence, and addressed the importance of working with young men in preventing violence against girls and women and promoting healthy relationships.

Pavee Point would also like to thank everyone who have supported and participated in the campaign and helped spread the message to stop violence against young women! 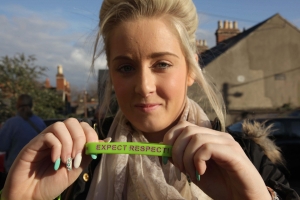 Rebecca also wrote an article which was published on TheJournal.ie on the issue of domestic violence in minority ethnic communities.

You can see the entire campaign on our Facebook page here. Don’t forget to check out Irish Traveller Television, who have produced a video for the Expect Respect launch.

Pavee Point is part of Travellers Together Preventing Suicide and we are looking forward to this webinar on 10th September. Pavee Point Mental Health Worker, Pa Reilly will highlight the need to collect...