Pavee Point was delighted to host a visit by Michael O’ Flaherty, Director of the EU Agency for Fundamental Rights.  Mr. O Flaherty met with staff and discussed issues impacting on Travellers and Roma.

Mr. O’ Flaherty said a national strategy was needed to deal with these issues and that these were issues that ngos and individuals could not hope to deal with alone.

Ipsos MORI (Social Research Institute) has been commissioned by the European Union Agency for Fundamental Rights (FRA) to conduct a survey of Roma and Travellers in six EU Member States including Ireland, in 2018-19. 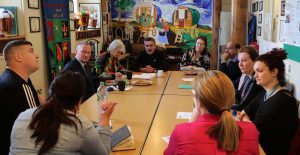 Here Michael O’Flaherty and Nicole Romain in a meeting with members of Pavee Point. ©Photo by Derek Speirs

Pavee Point has campaigned for many years that FRA’s work on Roma in Europe should be inclusive of Ireland, including Irish Travellers. So, this is a welcome development.