Minster Heiko said FUTUROMA highlighted the importance of the Roma minority as an example for a united Europe.  “The Roma arts and culture gives me hope for the Europe of the future. Their culture is part of our European DNA. 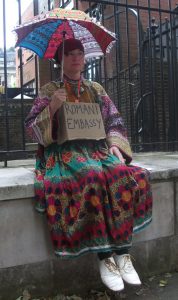 “For centuries they created human links between the countries of Europe. Roma have never been tied by national borders. And at a time when nationalism is on the rise this is more precious than ever,” said the Mnister.

FUTUROMA, commissioned by ERIAC (European Roma Institute for Arts and Culture) and curated by Daniel Baker, displays some of the finest contemporary visual artists of the European Roma community. In times of rising nationalism, the weakening of the EU and the rise of anti-gypsyism, FUTUROMA sets a counterpoint by showing creativity, solidarity and joint identity as an integrative power of the largest European minority.

While FUTUROMA marks the third time Romani artists are presented in the Biennale Arte, it is the first time the initiative is led by Roma themselves. The Transnational, multilingual and multireligious Roma community of over 12 million across Europe does not fit into the narratives of the national pavilions. Romani arts so far remained invisible to the majority audiences. FUTUROMA thus sets a strong signal in striving for a permanent presence at the world’s most prestigious contemporary arts event.

Ján Berky, Khatar avlam the kaj dzavas? (Where we came from and where we are going?),
1997. Collage on paper, 45.4 x 32.8 cm. Courtesy of the artist and the Museum of Romani
Culture, Brno