“Suicide in Ireland is at epidemic proportions.  In the Traveller community it’s like a plague and seems to be infectious,” said John Connors Love/Hate actor and Traveller when he launched the exhibition ‘Lived Lives: A Pavee Perspective’ this evening. (Fri 6th Nov 6.30pm). John, at a young age, lost his own father through suicide.

“Suicide can be prevented,” he added, “And mental health services need to work with us and Traveller groups to turn this around.”

John told people at the exhibition that creativity had helped him beat depression.  Having left education at an early age he found himself at 17 with no options. His brother reached out to him and helped him find something he really wanted to do in life.

Traveller poet Helen Hutchinson of Nenagh, Tipperary also spoke at the exhibition opening.  Helen has lost two brothers, two nephews and a niece through suicide.  Helen read from her poem ‘The Traveller Pain’ –

“Our young boys and girls are dying

Yes, by their very own hands

You can only take enough rejection

Look in, why don’t you have a glance?

The prejudice and ignorance

Even hatred each and every day

All because of being a Traveller

Is driving our young ones into the clay.”

The rate of suicide among Travellers is 6.6 times the national average – a sad reflection of the marginalisation and exclusion experienced by Travellers.

‘Lived Lives’ features a series of artworks created by artist Dr Seamus McGuinness of Galway Mayo Institute of Technology in collaboration with Professor Kevin Malone of UCD Department of Psychiatry and Mental Health.  The artist uses textile to invoke the sense of loss and pain caused by suicide in the Traveller community and leaves one with a haunting sense of absence. 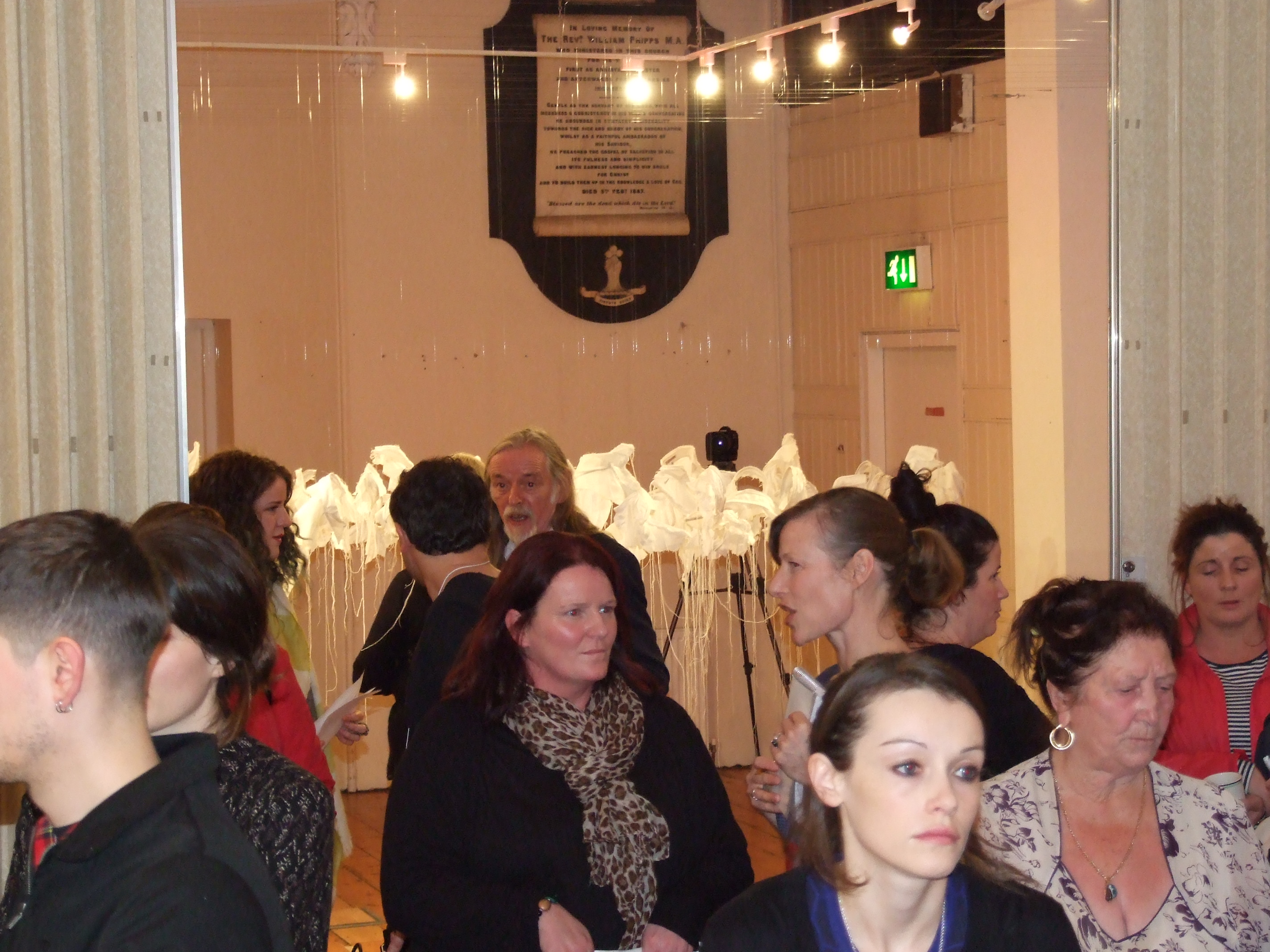 “Today suicide accounts for 11% of all Traveller deaths,” said Ronnie Fay, Co Director, Pavee Point, “The State needs to face up to its responsibility in this.  Exclusion and marginalisation is contributing to Traveller suicide and is also a barrier to accessing mental health care services.”

The AITHS found complete trust by Travellers in health professionals was only 41% compared with a trust level of 82% by the general population.

This ‘Lived Lives’ exhibition was put together following consultations with Traveller leaders and youth over the last year.  “By working together in a creative manner we aim to bridge the divide between awareness and action,” says artist Dr. Seamus McGuinness.

Says Professor Kevin Malone: “If Ireland is to advance healthcare it must advance Traveller health.  We need new knowledge and understanding and ‘Lived Lives: The Pavee Perspective’ can provide a platform for engagement and progress.”