There has been no tangible improvement in the education, accommodation, employment and health of Travellers and Roma  despite the Government’s National Traveller and Roma Inclusion Strategy launched in June 2017,  a report to the European Commission states.

According to this report, the inequality gap between Travellers and Roma, and the majority population remains entrenched and in the area of accommodation, in particular, the situation and experience of Travellers and Roma has gotten worse. 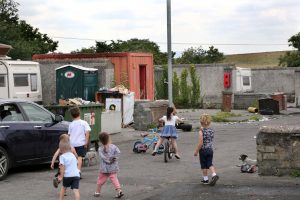 The situation in education has also regressed with the disbanding of a national advisory forum at the Department of Education and Skills in favour of a NTRIS working group which, until recently, focused on one specific NTRIS action.

The report states that

While there have been some positive action measures by some State agencies and in the area of  ethnic equality data collection –   longterm , sustainable initiatives are required, the report recommends.

Measures to be welcomed, according to the report are:

The report was prepared  by Pavee Point Traveller & Roma Centre as part of the Roma Civil Monitor pilot project, ‘Capacitybuilding for Roma civil society and strengthening its involvement in the monitoring of National Roma Integration Strategies’.   This is the second of two reports.  The previous report was published in March 2018.

The pilot project is carried out for the European Commission, DG Justice and Consumers.  It is coordinated by the Center for Policy Studies of the Central European University (CEU CPS), in partnership with the European Roma Grassroots Organisations Network (ERGO Network), the European Roma Rights Centre (ERRC), the Fundación Secretariado Gitano (FSG) and the Roma Education Fund (REF) and implemented with around 90 NGOs and experts from up to 27 member states.