We are conducting on online commemoration of  Roma Genocide Remembrance Day, 2nd August.

Gabi Muntean of our Roma Programme writes below:

Today is the day we remember. We remember the 3,000 Roma, including children, who were murdered in the gas chambers of Auschwitz-Birkenau on the 2nd of August, 1944. We remember the Roma who were shot, or died as a result of poor conditions after being sent to internment camps across Europe.

We remember the Roma who were displaced, persecuted, and killed during the Second World War. In the Roma community, we call these events the Porajmos, which translates to “the Devouring”.

Walking around the grounds, I could not stop thinking about the people who had died where I stood. I thought about the entire families that were wiped out, the families that were destroyed. Being there as a Roma woman was a life-changing experience. It reminded me that we must do whatever we can to continue honouring and remembering the all victims and survivors of Nazi cruelty.

During Dikh he na Bister, we met Roma and Sinti who had experienced unspeakable horrors, including Raymond Gureme and Rita Prigmore. It was inspiring to hear their powerful stories of escape and survival. Roma are the forgotten victims of Nazi rule.

One Third of Europeans Know Little About Holocaust

For many of the young Roma and Travellers attending, Dikh he na Bister was their first opportunity to meet survivors, and learn more about the Roma genocide during World War II.

A 2018 poll conducted by CNN/ComRes reported that a third of Europeans know little or nothing about the Holocaust [1]. A similar poll conducted in the UK in 2019 found that 5% of UK adults do not believe the Holocaust took place, and one in twelve believe its scale to be exagerrated[2]. We must ensure that all young people learn about the events of the Holocaust and the Roma genocide. It’s up to all of us, Roma and non-Roma, to keep these stories alive.

In Europe today, anti-Roma sentiment is still prominent and we should be alarmed by this. About 80% of Europe’s Roma population “still live at risk of poverty” according to the European Union Agency for Fundamental Rights[3].

In Ireland, there are Roma people living without shelter, and without food. Roma in Ireland still face discrimination in accessing employment, health services, education, housing and accommodation. We must remember the events of Europe’s past in order to work together towards a more equal future for all its citizens. We have to work together and we have to look out for each other.

Duty to Tell This Story

The stories of the Roma Genocide should stay alive in our minds and in our hearts. We have to pass these on to our children, to our grandchildren and to make sure that this will never happen again.

As Rita Prigmore said “What is important to me is to reach out to young people and show what really happened. I see it as my duty not to remain silent but to tell my story so that a new generation of young people grow up to have respect for every human being and know that any kind of prejudice can end up in a catastrophe like Auschwitz”[4].

Below Bianca Paun speaks about her experience in visiting Auschwitz-Birkenau.

“I had the opportunity to travel to Auschwitz-Birkenau as part of the Roma Genocide Remembrance Initiative. The trip to Auschwitz was far more intense than I expected. It was a unique experience that I will never forget. It felt surreal to be at the camp.

What took place in Auschwitz-Birkenau was a dark chapter in human history. The darkest fact I learned from the camp was how little documentation was available to obtain an accurate number of the deaths of Roma people throughout this time. 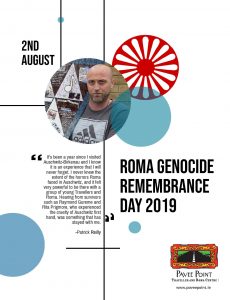 Roma Genocide Remembrance Day is not only a day to remember, but a day to educate and raise awareness about the horrors that Roma people experienced during Porajmos.”

Pavee Point’s Men’s Health Team is participated in ‘Empowered Voices’ a Traveller event on Sunday for First Fortnight 2021. Our Men’s Health workers were part of a panel discussion on identity and mental...